Is there a difference between being brave and being courageous? If so, what does that difference look like? Would bravery and courageousness fight on the same side of the battlefield or face off as equal, but opposing adversaries?

When I think of brave, pictures of soldiers defending their country, lion-hearted gladiators wielding swords, and Katniss Everdeen from The Hunger Games color my thoughts.

But when I envision courage, I see common people fighting injustice, speaking out and letting the world see who they really are, all while waging internal battles played out within the private spaces of their souls.

Exactly the same only different, right?

My first encounter with bravery came when I was five during the first day of swim lessons. Mom had bought me a pretty white bathing suit decorated with bright, red strawberries and spotted lady bugs. I had been so excited to finally learn to swim and refused to take the suit off for the entire six days leading up to the first lesson.

Come Monday, I was splashing wildly, making new friends and couldn’t imagine anyone happier than I was that day. At least not until the diving board entered into the equation.

I climbed the ladder only to drop immediately to my knees once I was far enough out to be suspended over the water. I crawled to the edge never moving my eyes from the plank in front of me. Once there, my legs somehow found their way to a vertical position as I stared into the chlorine-blue abyss dotted with outreached hands and encouraging voices below.

Why did my belly feel funny? Was my heart beating outside my body? Why was I so scared?

The next fifteen minutes were spent in a delicate dance between almost leaping and tummy tingling paralysis. The only thoughts in my head were the fear of drowning and the horror of disappointing my watchful mother. Like the flimsy board, five-year-old me was teetering with indecision and angst.

Somehow I managed to look over at my mom perched at water’s edge. Her eyes were locked on mine with an unmistakable seriousness typically reserved for spilled milk and sibling discord. Her words were deliberate, forceful and non-negotiable:

“You need to jump. That is your only choice and people are waiting on you.”

The physical fear of drowning was trumped 100 times over by the fear of disappointing her.

Once my little head bobbed above rescuing arms, I was able to catch my mom’s look of simultaneous relief and pride. She told me later, “You were so brave! I love my brave girl!”

Most of my life has been a pilgrimage of seeking quests to show others that I’m courageous, noble and brave. Looking back, I can see that the jump off the diving board was the first in a series of many events meant to demonstrate false bravado all while covering up the many things I was (am) truly afraid of.

I have a chicken-heart in a brave girl’s body.

I’ve been pretending brave without being internally courageous and this post is my confession. I physically move forward to emotionally avoid the things that really scare me.

It’s not that I don’t do hard things–I’ve done plenty! But courage doesn’t feel real to me because my chicken-heart steers itself away from messy emotional stuff whenever it can.

Jump off the high dive? Sure!

Run a marathon? Got that covered. Twice!

Apply for a job you’re not qualified for? Why not?! I’ll learn as I go.

Speak in front of 1,000 people? What’s the big deal? Those people don’t know me.

Sky Diving? That’s just stupid. Give me something harder.

Wanna get married? Yeah, okay. I can’t help myself because I do love him.

How about a baby? What could be so hard? No epidural please.

Watch those babies grow? Whoa. Wait. They grow up?

Can you watch them get hurt or be disappointed or make mistakes? No! Can I opt out of this game now?

See them leave the nest? They LEAVE??? What?! Where’s the replay button?

Watch your friend succumb to cancer? Hell no. I did NOT sign up to watch anyone die. Are we done here? Isn’t there a plane I can jump out of instead?

In doing research for this post, I had a wriggling, niggling intuition that there must be a Webster-defined difference between being brave and being courageous and that I should be able to hunt down a credible source to confirm the hypothesis.

Here’s what I found:

Courage (from Brené Brown)
Courage is a heart word.
The root of the word courage is cor – the Latin word for heart.
In one of its earliest forms, the word courage meant “To speak one’s mind by telling all one’s heart.”

Courage is a heart word. I knew it!

Admittedly, I should have used Webster for both sources, but if you read Brené’s passages or hear her lectures, you’ll know she accurately defines terms so that her audience has a common framework for discussion around tough concepts. Like most people, I use the terms bravery and courage interchangeably and view them as positive influences in a culture that needs a healthy dose of both.

After much thought, I’m sticking by my original hunch. I see bravery as a physical feat accomplished outside a predefined comfort zone and courage outside that same comfort zone but more in the emotional/mental space.

When my son was only six, he asked me, “Mama, why do you run so much?”

I simply replied, “Because I like it and it helps me think. “

He quickly came back with, “I just don’t understand. Are you running to something or away from something?”

Young, wise grasshopper had revealed a well-hidden secret: my heart was an empty vessel of inconsistent hypocrisy. A visible, tangible brave front demonstrated by doing anything that anyone dared me to do in order to disguise the emotional fear hidden within the walls of tightly wrapped persona.

My son helped me realize that I’ve been brave without being courageous. I’m terrified of my own emotions–happy AND sad. I can easily control a training schedule, run a race, climb a mountain, saw down trees and even raise money during the course of it. Confession: I do those things so that I don’t have time to watch my babies grow up and leave, see my closest friends hurt, or experience pure joy tainted with the irrational thoughts that it’ll all end someday.

We seek, appreciate and often adore vulnerability in others. We love them for their honesty and willingness to trust us with the deep and imperfect parts of their souls. In that same breath, we despise any display of our own personal “weaknesses” and exposure of vulnerability. What we love in others is the same thing we hate about ourselves.

Think how often we’ve shrunk back into our shells because of the fear that someone will find out that we aren’t who our actions say we are. It’s our human nature to hide the bitter facts because we may be rejected or unloved.

I will not walk away from bravery–ever. Bravery is my instinctual character and the side-kick that sets the stage for courage that needs to happen next.

Back to the original question…Is there a difference between brave and courageous? As I mentioned at the start of this post, I could really use your help and want your opinion. There always seems to be a crossroad for us and the need to be courageous is going to be more important than ever. I’ve proven that I can walk, climb, clear, chop and run on that path . . . but can I live courageously? Can I feel courageously? Can you?

Previous Article What is your legacy? 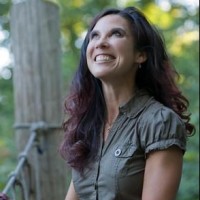 About the Author Michelle Terry

Michelle Terry is a registered clinical dietitian whose day job involves keeping people healthy through wellness, prevention and chronic disease management. Her passions are her children and extended family. In addition to her family and career, Michelle keeps busy with a huge garden, running, yoga and boxing. She writes a personal blog with the intent to positively broadcast her imperfections so that yours won’t seem so bad. In essence, she is a mom/wife/friend/daughter trying to figure it all out and stay laughing while she does.

Get Out of Your Head…and Into The World!

Courage Consciousness is The Secret to Personal Empowerment!